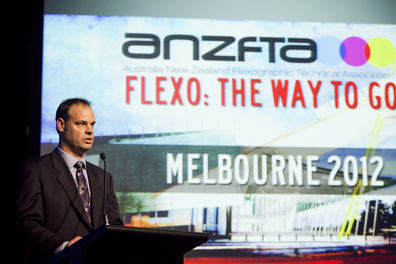 The Australia New Zealand Flexographic Technical Association (ANZFTA) have an annual awards event - including an Apprentice Award. This year our own Gareth Hilton was nominated after his Apprentice of the Year win at the NZ Pride in Print Awards in August 2012.

Gareth and Anne-Marie attended the ANZFTA Awards on Friday 21 September, following the two day conference held in Melbourne. We were just two of the four Kiwis in the room of 400 people, and Gareth was certain he'd be trumped by one of the locals.

So we were tickled pink to hear his name called and Gareth is very pleased with his prize - a two week trip to the US early in 2013 to visit the manufacturing sites of some of the largest suppliers to the flexographic industry.

Here's Anne-Marie's speech from the night.

Congratulations to Gareth, this is a fabulous achievement and well-deserved recognition for all your efforts.

Gareth is a happy, humourous, dedicated and smart man who is an asset to Rapid Labels and a worthy example to up-and-coming printers in our industry.

The wider Rapid team will be sorry to miss out on tonight, they are justifiably very proud of Gareth and it is a tribute to them that we have one of our own bringing home the big award from tonight. What a tremendous achievement - well done.

Lastly, thank you to the judges and thank you to the association. This award will look great next to the Rugby World Cup, the Bledisloe Cup and Netball's Constellation Cup...have a great night everyone.